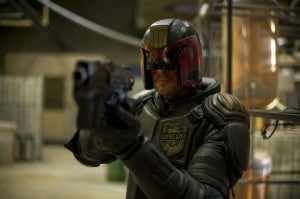 Holy crap. ComicBook.com was just treated to a special Comic-Con sneak preview of Lionsgate's Dredd 3D, the Judge Dredd reboot due for release in September, and it was incredible. If Die Hard and Sin City had an awesome, brilliant, violent baby, this film would be it. It was also unequivocally not for the feint of heart. Dredd is a violent, gory film with more F-bombs than the average Quentin Tarantino movie and more energy spent on how the body reacts to being punished than anything I've seen since Saving Private Ryan. It's one of the hardest R's I've ever seen. Fans of 2000AD, still stinging from the slap in the face of the Stallone film, will be pleased with this new iteration. Dredd is a profoundly disturbing movie to watch, at times--and not even just for those reasons listed above. The film captures Judge Dredd's personality perfectly, and much of what makes the character work on the printed page seems incredibly sadistic and fascistic when you actually see someone doing it to another person. But director Pete Travis knows just when to pump the brakes, and the character may do things that make you squirm in your chair a bit, but he never actually crosses the line into being hard to root for. In fact, both Karl Urban's Dredd (and no, folks, he doesn't remove his helmet--not once) and Olivia Thirlby's Judge Anderson were pretty hard not to love. Anderson in particular has the deck stacked against her from the word go, and even Dredd himself doesn't particularly care for her. That, and her strong sense of personal morality and responsibility--something Dredd doesn't really have, as his whole worldview is much more black-and-white and big-picture--make her an irresistible character even before you get into the fact that Thirlby is a terrifically talented actress who sticks the landing in Dredd. Urban  has somewhat less to work with, but he's a perfect action hero--he spouts catch-phrases, takes on wave after wave of bad guys by himself, and has moments of gratuitous violence that toggle between brutality and hilarity. Lena Headey, who plays villain Ma-Ma in the film, is arguably a low point, but only in that she's merely passable, not that she's all that bad. When compared to a group of actors at the top of their game, she looks worse in context than she would in a similar film where the actors around her weren't upstaging her performance. Having been somewhat concerned after seeing the stylized slow-motion filmmaking in the movie's trailer, it was halfway into the movie before a switch in my head flipped and I realized that we weren't dealing with Sucker Punch or something--it's more like Sin City. The bits where the 3D effects and the visual effects in general stop being realistic weren't just poorly-done, but stylized for a purpose. That's the moment the film went from being a good actioner with moments of shoddy effects to one that really had something interesting to offer cinematically. The Die Hard comparison I made above isn't made lightly, either; it's really two people against the world in a series of increasingly-unrealistic and yet awesomely entertaining scenes of combat. The overwhelming forces that Dredd and Anderson find themselves mowing through serve to make their entire ordeal feel heightened--like eventually they'll just be swarmed and consumed like in a zombie movie. That they're able, time and again, to find a clever way to reverse the tide and come out with some spectacular win is the kind of thing that makes an audience stand up and cheer--even if it's during a time when something really grotesque and inhumane is happening to someone onscreen. Dredd will be in American theaters on September 21. Go see it. It may be my personal favorite comic book movie yet this summer.