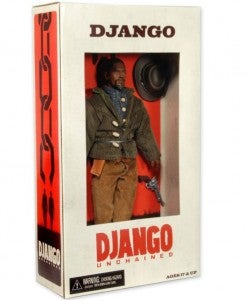 Online auction giant eBay has ended auctions on controversial, discontinued action figured derived from the Academy Award-nominated Quentin Tarantino film Django Unchained, citing its Offensive Materials policy. Listings for the toys "were removed as they were in violation of our Offensive Materials policy", an eBay representative told Deadline last night. EBay forbids offensive products "that graphically portray graphic violence or victims of violence, unless they have substantial social, artistic, or political value" including "racially or ethnically offensive language, historical items, reproductions, and works of art and media". The action figures were discontinued following complaints from civil rights groups who claimed that they made light of the plight of American slaves. The Weinstein Company, the film's producers, asked National Entertainment Collectibles Association (who made the licensed toys) to stop production. The figured were also reportedly removed from retailer shelves (except, of course, in specialty markets where they were likely declared as "already sold" and then marked way up). Rev. K.W. Tulloss, the National Action Committee's president in Los Angeles, said "Selling this doll is highly offensive to our ancestors and the African American community. The movie is for adults, but these are action figures that appeal to children. We don't want other individuals to utilize them for their entertainment, to make a mockery of slavery." The action figures were, as most of NECA's licensed figures are, targeted at the adult collector market, with steep price tags even before the discontinuation drove the cost through the roof. Before eBay started cancelling sales on the action figures, one had sold for over $2,500 on the site.