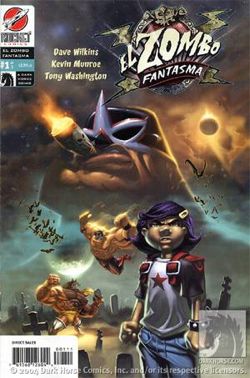 Remember when only comic books featuring long established characters were optioned for movies. With the success of such movies as Wanted and Hellboy, studios are no longer afraid to take a chance on a comic book that might be relatively unknown to the public at large. With that in mind, it should come as no surprise that Dark Horse Comics has announced that their hit El Zombo Fantasma comic book will join the ranks of upcoming comic book movies. Death Ray Films and Maya Entertainment are teaming up in order to adapt El Zombo Fantasma to the big screen. The movie will be produced under the Death Ray Films banner, which was recently formed by Chris Patton, Kevin Munroe and Robert Sanchez. El Zombo Fantasma was created by David Wilkins and Kevin Munroe. In addition to the live action feature film, Death Ray Films and Maya Entertainment also plan to create a new animated series based on El Zombo. El Zombo Fantasma tells the story of the mysterious murder of the world's most notorious Mexican wrestler. El Zombo is able to bargain his way out of an eternity of fiery damnation by returning to Los Angeles to play guardian angel to a troublesome teen named Belisa Montoya. El Zombo soon realizes that all is not what it seems and that his fate has been intertwined with Belisa for centuries. "Zombo started years ago as just a geeky idea between two friends who worked at the same video game company," said co-creator Kevin Munroe. "But Dave and I always knew that the property had a broader appeal than just its publishing roots, and now we'll see it finally reach an entirely new audience. I'm thrilled to be a part of creating this new breed of superhero for the big screen." "As a Cuban-American in this industry, I see El Zombo as a unique property that will not only showcase Latinos but also appeal to all audiences. It has action, romance, redemption and wrestling, it's a Latin Hellboy," said Death Ray Films co-founder Robert Sanchez. "It's the prefect date movie!" "El Zombo is an extremely cool superhero and it's tremendous, pile-driving fun," says Kellvin Chavez. "As a fan of wrestling, I used to watch 'Santo, el Enmascarado de Plata' one of the most famous Mexican free wrestlers, so I was excited by this project." "We are excited to work with Death Ray and Dark Horse on El Zombo as it furthers our goal of bringing Latino themes and Latino talent to the commercial market," said Jose Martinez Jr. for Maya. "We plan to blow this out in a big way so that everyone can enjoy this awesome idea.