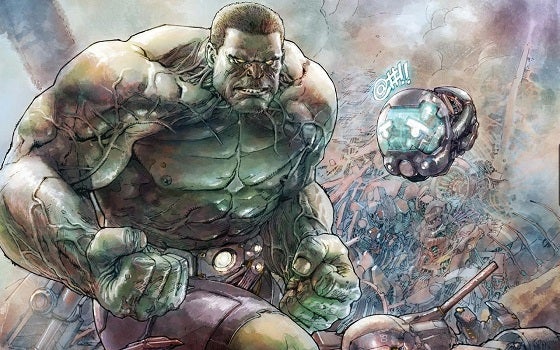 Mark Waid, the writing force behind Marvel's current Hulk and Daredevil comic books, was at Motor City Comic Con this weekend and I had a chance to ask him a few questions. With rumors of a new Hulk movie coming to the big screen after The Avengers dominated theaters world wide, signs have pointed to the possibility of a movie based off of the hit series Indestructible Hulk, which wrapped up in March. Indestructible Hulk saw Bruce Banner cut a deal with Maria Hill and S.H.I.E.L.D. which basically had Banner put his brain to work for S.H.I.E.L.D., while also giving them the Hulk for use as a living WMD (Banner builds, Hulk Smashes). Since S.H.I.E.L.D. is no longer around, the theory seems a bit shot. However the friendship we saw grow between Tony Stark and Bruce Banner in The Avengers could still work as early news from the sequel to The Avengers says that Stark is financially backing the Avengers after S.H.I.E.L.D. falls apart. I asked Mark Waid if there was any truth to the rumors of the next Hulk movie being based off of his work, and he said "There's rumors, sadly that's all I know. The thing about Marvel publishing, is that Marvel Studios has a hands-off approach with it -- which is great. The Marvel films don't dictate how the stories go in the comics, they realize that the tail shouldn't wag the dog. But, Marvel publishing is sometimes the last people to know what they do in the movies." But it does seem like Waid will be involved in some way with the upcoming Dardevil Netflix Series, which is set to start filming in New York City some time this year. "It's in good hands. I don't want to overstate, but I've been asked to be involved on some level." No news yet on who will be cast as Matt Murdock, or which villains we will see in the series. But if Waid is involved, and it's anything like the material we've seen in his Daredevil run, we're all in for a big treat.