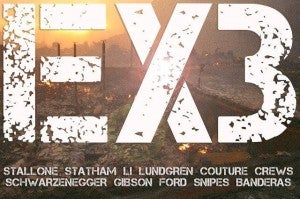 On his Facebook page, The Expendables creator Sylvester Stallone has provided fans with what appears to be the first official promotional banner for The Expendables 3. While it's nothing but a logo and some names against a bombed-out background, Stallone adds his own tag line: "Hey guys! EX3 is a bomb!" While this is the first "official" image to be released, some paparazzi photos that were taken earlier this week have been resurfacing on social media accounts of the movie's huge cast. There's also some talk of the long-rumored "Female Expendables" or "Expenda-belles" film, an officially untitled project in which MMA fighter Gina Carano is set to star. You're Next star Sharni Vinson has reportedly signed on, joining Carano and Katee Sackhoff.