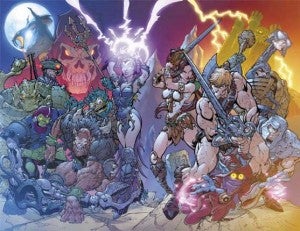 Walt Disney Studios and Pixar announced yesterday that Andrew Stanton, most recently the director of John Carter but better-known for his Pixar work, would return to animation for a second Finding Nemo film, while Pixar's biggest competitor, DreamWorks Animation, is this|close to buying up Classic Media. Classic Media, headed by a former Marvel executive according to Bleeding Cool (who describe the company as "one of the biggest libraries of character rights"), controls the animation rights to He-Man and the Masters of the Universe, Lassie, Felix the Cat, Archie and the Riverdale Gang, Casper the Friendly Ghost, Rocky and Bullwinkle and more. It's essentially a company that's been run for sometime as a clearinghouse for franchise animation rights, picking up whichever ones it could, and that's built the company to a value of nearly $150 million, according to The New York Times. The Finding Nemo deal reportedly sees Stanton returning to his most profitable franchise (coming, of course, off the only loss of his career and one of the biggest financial beatings Disney has ever taken on a film), with the understanding in mind that Disney will underwrite Stanton's next live-action film in exchange.