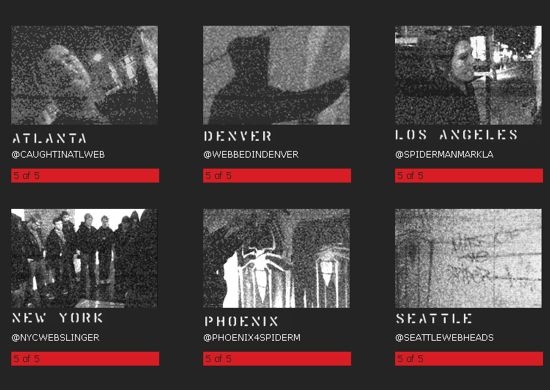 The Amazing Spider-Man continues to gain ground on the other big comic book movies of summer. While early on Amazing Spider-Man had seemed slow to the game against The Dark Knight Rises and The Avengers, Spidey has swung back with a vengeance. After a wildly successful sneak preview event in major cities around the world, Columbia Pictures launched a viral campaign that has become the talk of the comic book world. In the second trailer for Amazing Spider-Man, there is a hidden website URL: MarkoftheSpider-Man.com. The website initially showed various screens of static, but eventually revealed six twitter accounts tied to six different cities. The twitter accounts revealed a series of locations where the first fan to arrive at the location was given a drop package, which contained hoodies and a cell phone. The fans also became operatives in the Amazing Spider-Man viral campaign to promote the movie. The first assignment was tagging various locations with the Mark of Spidey. Of course, the locations were pre-approved and authorized by Columbia Pictures, so people were not engaging in random graffiti. Now, the MarkoftheSpider-Man.com website has been updated with the static screens displaying shots of the Spider-Man logo spray painting assignment. In addition, the first clip from the Amazing Spider-Man movie has been revealed. Remember in the second Amazing Spider-Man trailer where Peter Parker enters Gwen Stacy's apartment through the fire escape. When Gwen points out her apartment is twenty stories up, Peter quips that Gwen's doorman is intimidating. It turns out that Peter is not just making a little joke, as the first Amazing Spider-Man movie clip reveals a scene between Peter and the intimidating doorman. While the scene doesn't reveal much in regards to the plot of Amazing Spider-Man, it does give us a good example of how Andrew Garfield will play his role of Peter Parker. The Amazing Spider-Man movie will open in theaters on July 3, 2012.