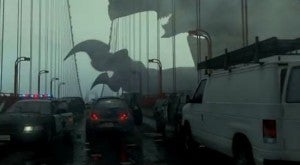 The first reviews are beginning to roll in for Warner Bros.'s Pacific Rim, and they're just about what you would expect from the movie. That's to say, it's got a 78% at Rotten Tomatoes so far with mostly positive reviews--but the first handful of reviews that aren't good use words like "loud," "dumb" and "clunky." And while a few of the early reviews are the kind of ecstatic enthusiasm fans have been expecting, both the positive reviews and the "negative" are mostly measured and middle-of-the-road, with a handful of positive standouts and one or two negative ones. Hey U Guys call it "A visually striking film but hollowed-hearted," while Slant similarly says that "Guillermo del Toro doesn't rise above the obligations of staging a film of this sort as a multi-level video game, a stylish but programmatic ride toward an inevitable final boss battle." 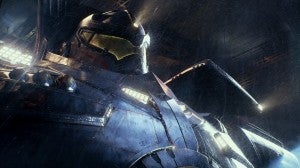 "Huge scale entertainment with guts and a heart - even if the brain is sometimes lacking during the more human moments," said SFX Magazine, while film.com praised the movie, saying "They don't let 14 year-old boys direct multi-million dollar feature films, but somehow Guillermo Del Toro has channeled the interests, attitudes and fears from that mindset with a clarity that far surpasses contemporaries like Michael Bay." Generally, it seems as though the film will please those it sets out to please but that it may struggle with the non-fanboy audiences, as many of the reviews feature a recurring theme that the film is exactly what you'd expect it to be, no more and no less. IndieWire gave the film a B-, saying, "There's not much more to "Pacific Rim" than its principle reference points, which Del Toro clashes together with a chaotic fervor on par with the battles at the movie's center." As a result, it seems as though the film may rise or fall on the strength of its direction, about which Digital Spy said, "Guillermo del Toro blows the likes of Battleship and Transformers out of the water with action sequences that are breathtaking in scope and ferocious in intensity."For every review that says the film is a revelation, though, there's another that says even the effects have some issues. "Whenever the jaegers and the kaiju throw down in Pacific Rim, it's at night in the pouring rain - unless they're both at the bottom of the ocean. What's the point, exactly, of cutting-edge CG monsters filmed in a way where we can barely see them?" Asks The Wrap. The answer there, of course, is that it's Guillermo del Toro and he rarely spends too much time with his films saturated with light. Still, critics have rarely criticized how they've looked in the past so it's probably not the issue The Wrap makes it out to be. If you want more, check out the film's Rotten Tomatoes page. Come back soon for ComicBook.com's review of the film.