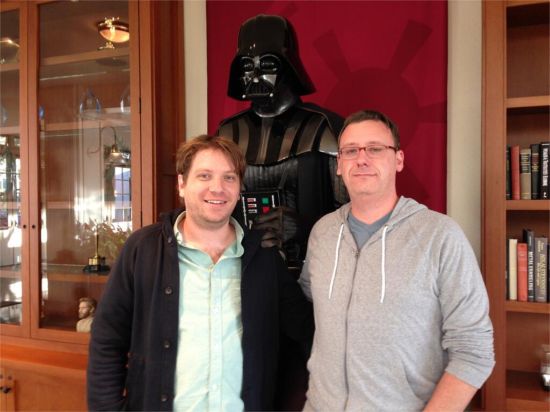 Just around a week ago, Disney and Lucasfilm officially announced the team behind the first Star Wars stand-along film. Gareth Edwards will direct the first stand-alone Star Wars film, with a screenplay by Gary Whitta. While Disney and Lucasfilm did not reveal who the stand-alone film will revolve around, most early speculation revolves around Boba Fett. However, it's a different Star Wars character that Edwards and Whitta refer to as boss in the first pre-production, behind-the-scenes photo for their Star Wars film. Whitta tweeted the image above, along with the text, "This will be a day long remembered. With @starwars director Gareth Edwards and our new boss!" The first Star Wars spinoff movie is due out on December 16, 2016.

This will be a day long remembered. With @starwars director Gareth Edwards and our new boss! pic.twitter.com/1LdP1uJebq — Gary Whitta (@garywhitta) May 28, 2014