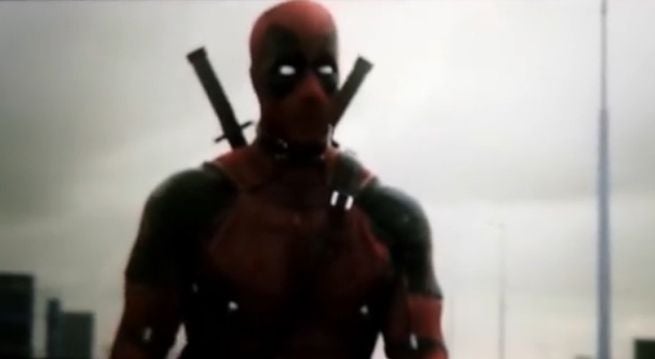 He's the chap with the FX experience and who works for Blur Studios. He's been working on Deadpool for a long time now, and was the one behind the recently revealed test footage. Miller and Ryan Reynolds have fought hard to convince Fox to make this movie. They're awfully... lucky, I suppose you'd say, that the footage was leaked and generated such loud buzz.

2. The test footage was based on a sequence from the screenplay.

Though it's not definite yet that there won't be another draft, and if there is, we don't know who will write it, but development of Deadpool so far has hinged on a screenplay by Zombieland's Rhett Reese and Paul Wernicke.

Their script opens in a moment of frozen time at the heart of an almighty action sequence on a freeway. Ten minutes or so later, the film returns to that scene and take it off pause. The ensuing chaos is truly epic stuff. The test sequence was based closely on some of this scene's more manageable elements. If they manage to film the whole thing, not only will it be R-rated, it will be so jam-packed full of ludicrous, over-the-top action beats that you'll have to watch it more than once to really appreciate them all.

Oh, and in case you didn't know, the scene was put together back in 2010-2011, and only recently turned up because some hacker-ish snoops were poring over Blur Studios' website. Allegedly.

3. The film is going to be (in so much as anything is these days) live action.

The test footage was produced in CG, but the film itself is going to feature real actors on real sets with real props... except, of course, when it doesn't. Because there's no way on this Earth that any stuntman, let alone Ryan Reynolds, could pull off some of these shenanigans without a little computerized assistance.

And there's no way Fox is going to close down that much freeway and destroy that many cars for real. It would make this film so expensive it would have to be released as a PG just to have a chance of breaking even, and that's just not going to be happen.

4. Appearances by several other Marvel characters are planned.

The screenplay features a number of other characters from the Mutant-y end of the Marvel comicsverse. What's more, when casting for the project was ongoing, the filmmakers were actively looking to fill the same roles, namely Wyre, Ajax, Sluggo, Garrison Kane and even Colossus, the X-Man. Interesting that he was showing up on the casting grids when there's already Daniel Cudmore in the role in the X-Men movies. Might simply have been an admin cock-up at some agency or another when putting the grid together.

Of course, there are even more Marvel characters in the film, as Deadpool's key supporting cast need to show up too, from Vanessa Carlysle to Blind Al.

5. The "official" description of Deadpool promises all of his hallmarks.

Even though Ryan Reynolds had the role in his pocket, the character of Deadpool was still described as part of the casting process. Here's the summation of the character as issued:

"Huge man and armed to the teeth with his twin katanas and Set matching Desert Eagle pistols, his sarcastic wit and ever- running mouth are nearly as deadly as his fighting prowess. He has a tendency to break the 4th wall and banter with the audience. He was boyishly handsome in his youth, but presently has extensive disfiguring scars over his face and body."

Of the other character description, I really liked the one of Patch.

"Bartender at Sister Margaret's School for Wayward Girls, Deadpool's favorite bar. Think Tom Cruise in Cocktail, then think the opposite. Patchiest beard ever, hence the nickname."

Because this is Deadpool, the character knows he's a character in a film. He also knows that he was a character in a film before, and there are jokes at the expense of X-Men Origins: Wolverine. People will argue forever if this Deadpool movie is "in the same continuity" as the X-Men films, but that will be a case of spectacularly missing the point.

I hope they really do cast Cudmore as Colossus, and mainly because it will help keep this nice and confusing.

7. And the very last one for bad luck.

An old draft of the script featured a post-credits sequence depicting the accidental death of Amy Winehouse and joking about what might have killed her instead. Sadly, she has in fact passed away in the meantime, and the details of the joke are probably a little too close to be funny any more.

Will the scene go entirely, or will Winehouse be swapped out for another candidate? There are plenty of ways they could cap this film off, and I'd expect something totally unexpected.

Five Things We Know About The Deadpool Movie (Plus Two More)