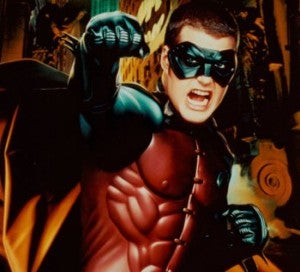 Any actor who has ever been associated with Batman in any way can look forward to being asked their opinion on the casting of Ben Affleck as Batman in the coming months. We've already heard Adam West provide Ben Affleck with a helpful personal hygiene tip. Now, we have a former Robin weighing in with his opinion. In an interview with ET Canada, Chris O'Donnell, who played Robin in Batman & Robin and Batman Forever, voiced his support of the Ben Affleck casting. O'Donnell said, "I think it's great. I think Ben will be a great Bruce Wayne." O'Donnell added, "He's been on huge films before. Ben knows what he's doing… I think it really raises the interest level for that movie — not that there wouldn't already be — but there's a huge section of the movie-going population that is really going to be interested in that film now because Ben's in it, especially coming off Argo." In addition to thinking that Ben Affleck will do a great job playing Batman, O'Donnell also mentioned that he could see Affleck eventually directing a Justice League movie.