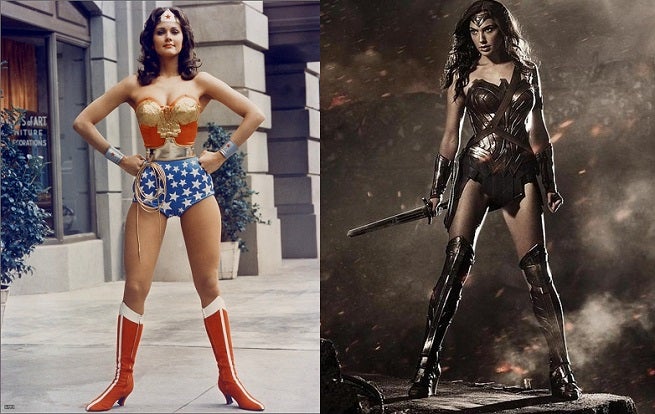 During an interview in support of her episode of Skin Wars earlier this week, former TV Wonder Woman Lynda Carter expressed some skepticism about the costume to be worn by Gal Gadot in Batman V Superman: Dawn of Justice and its presumptive Justice League and Wonder Woman follow-ups -- but has given it more credit than many critics on the Internet.

"Well, I was missing the red, white and blue, I have to say," the actress admitted to Access Hollywood. "I don't know. I haven't seen it yet, so I really can't comment. Maybe there's a lot more color in it than what we saw in the picture. It's almost impossible to play a superhero anyway. You can't. You just have to play a character that happens to do these amazing things. That's the only way you can do it. And the costumes all take care of themselves, but it was a little more – I'll have to wait and see. I hate to comment on something that I haven't seen and I'm very supportive of Gal Gadot. I'm very supportive of them doing Wonder Woman, putting her in any capacity. I think she needs to be out there. ... It's high time somebody took a chance and did it and so I'm really happy about that."

Criticisms of the color palette are common and have been ongoing since the first images of Henry Cavill in Man of Steel arrived online.

Batman V Superman: Dawn of Justice stars Gadot as Wonder Woman alongside Cavill's Superman and Ben Affleck as Batman. The film is expected in U.S. theaters on March 25, 2016.

Ghostbusters: Afterlife Star McKenna Grace Explains Why "It Was a Little Bit Scary To Try and Live Up to Egon Spengler"

Red Notice Beats Bird Box As Netflix's Most-Watched Movie, According to The Rock

Disney's Encanto to Win Opening Weekend at the Box Office