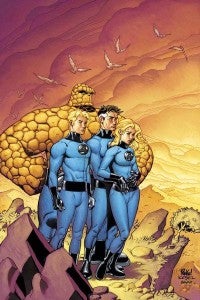 While 20th Century Fox (who own the rights to the Daredevil, Fantastic Four and X-Men franchises for development as live-action films) haven't had anything new to say about a rumored New Mutants movie they're working on, CEO Tom Rothman has been giving some interviews talking about the studio's interest in keeping their superhero franchises alive, and today seems to indicate major movement on Fantastic Four. Rothman confirmed with Collider what fans and media have already known for about three months: that Chronicle director Josh Trank is involved with crafting a vision for the new Fantastic Four movie. As yet, it's unclear whether Trank will actually direct the film himself, especially as Chronicle 2 is in development, but once there's a script the filmmaker will reportedly reassess and decide what his role will be going forward. That sounds a lot like the role Christopher Nolan has on Man of Steel, Warner Brothers' upcoming Superman relaunch, although shortly after he agreed to act in that capacity, Nolan decided against making the film itself and instead handed the reins over to Watchmen and 300 filmmaker Zack Snyder. In an interview with MTV's Splash Page blog, Rothman reiterated the plans, saying that he's hopeful Trank will ultimately direct the film. That video is available below. After the last two Fantastic Four movies failed to connect with fans, and the second--Fantastic 4: Rise of the Silver Surfer--flamed out at the box office, it seemed unlikely we would see a new FF movie for a while. If the property sits still for too long, though, the rights will revert to Marvel--something Fox certainly doesn't want--and so a reboot was announced to be in the works sooner than later but for a long time the studio didn't have anything in the way of specifics until January, when Trank's name came up and has persistently been linked to the project. He's also been a hot commodity since his on-the-cheap blockbuster hit theaters, attached to a number of other seemingly-longshot comic book movies, like Venom and Red Star.

Batman and In Like Flint Actress Jean Hale Dies at 82