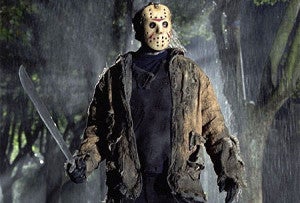 Yesterday, Warner Bros. announced the release of a Blu-ray collection that for the first time made a number of the less-marketable films in the Friday the 13th collection were made available on the format. And while Warners didn't have any official word on a sequel, series creator Sean Cunningham had plenty to say on that front in an interview with FearNet. "There will be another Friday the 13th, which will probably get shot in the spring," he said, noting that the property is now at Paramount Pictures. "If it all goes as I would like, it would then be released at the beginning of 2015." That would make it one of the first big franchise films in a year that's loaded with them; Star Wars Episode VII, Avengers: Age of Ultron, Batman vs. Superman and the final Hunger Games film are just a few of the mountain of big-budget blockbusters slated for release in that 12-month period. The next Friday the 13th movie will be a stand-alone concept that they have nailed down as a reboot or a continuation of the (already recently rebooted) series. Still, Cunningham seems to suggest that within five years, audiences could already grow tired of Jason's schtick. "I think the chances are good" for an eventual Freddy vs. Jason sequel, the filmmaker explained. "I think it will ultimately be a marketing concept. Right now, I think the audience would have to start getting bored with the Friday… movie by itself or the Freddy movie by itself. I don't think it's going to happen in the next short period of time." He's also got plenty of other-media plans for the horror franchise, including The Crystal Lake Chronicles, a Smallville-style "origin" story for Jason Voorhees and a video game that would presumably be less awesome than the NES version that spawned its own sold-out NECA action figure at Comic Con this year. But, he added, it could happen "conceivably in five years." Which seems, relatively speaking, a pretty short period of time considering that it wouldn't give them time to make a Friday the 13th sequel between 2015 and five years from now. Even if he meant five years from the release of the first new movie, that's still a pretty short window. "The other reason that I think it's a possibility is that we spent so much effort in trying to find a way to get the two of them together in a movie that was action-packed and unpredictable that we had lots of material that was unused," he said. " It becomes possible to use it, or at least basic ideas or structural ideas that are already in place. We don't have to start from scratch."