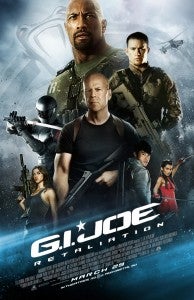 Bruce Willis takes center stage in the newest theatrical poster for G.I. Joe: Retaliation. The film, originally meant to have been released over the summer, will hit theaters on March 28 after it was sent back for reshoots just weeks before it was scheduled to begin its run. Nominally, the change was made to improve the 3-D effects in the hopes of a stronger international box office, but rumor has it the script was actually being reworked fairly dramatically, including either altering or removing a scene in which Channing Tatum's Duke was killed in action. The new poster may be part of an effort to rebrand the film somewhat, since the delay of the theatrical release came so close to the intended date that much of the promotional campaign had already kicked off in big cities, and the old posters would likely be ignored or overlooked by people thinking they were months old.