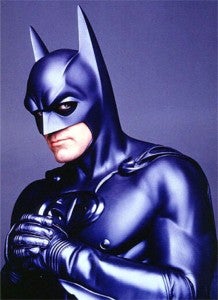 Over the last month, numerous celebrities have weighed in with their opinion on Ben Affleck as Batman. Many of them with only vague or sometimes non-existent connections to the Batman franchise or Ben Affleck. Of those that have weighed in, some of the most interesting comments have come from former Batman actors such as Adam West, Val Kilmer, and Michael Keaton. Now, George Clooney has finally weighed in with what has to be the most accurate comment yet from a celebrity on the whole Batman situation. In an interview with Empire Magazine (via CBM), George Clooney said, "I am the least qualified person to comment on anyone playing the role of Batman since I so terribly destroyed the part." While that one sentence response has got to be the best reply yet from a former Batman, Clooney did go on to lend some supporting words to his friend Ben Affleck. Clooney added, "I tend to look at it like this - let's just see what the movie is before everyone starts beating him up. He is a smart man, he knows what he is doing." Batman Vs. Superman is scheduled to be released in movie theaters on July 17, 2015.