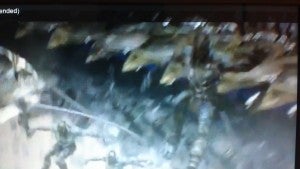 Recently there were two or three big things that got me to thinking about the culture of moviemaking and moviegoing in the 21st Century. With cell phone cameras and fans who can trace a production's location on the Internet, filmmakers like the ones making The Dark Knight Rises and The Avengers are hard-pressed to surprise viewers in the theater. It seems to be leading to a culture where it's no longer enough to simply withhold facts--but sometimes you have to actively lie to the fan base in order to retain the "wow" factor you want from your movies. Comic book fans are a bit used to this treatment--after all, with Bleeding Cool breaking stories about things like Secret Invasion and Final Crisis before they're ever a reality, creators and publishers have often found themselves in the unenviable position of saying things like "No, of course Countdown isn't counting down to another Crisis. Where would you get a silly idea like that?" But the moviegoing audience may be a little less used to it, and the motives might be somewhat confusing. Does it really matter whether The Avengers features Skrulls or not? You'll still see it! Perhaps Marvel, in (apparently) telling the fans something that's self-evidently not true, was just trying to protect enjoyment of the movie and keep comic book fans from spoiling aspects of the story for non-readers for as long as possible. On the other hand, the very unimpressive initial reveal of Amazing Spider-Man's take on classic Spidey villain The Lizard as a Pez dispenser probably ended up losing something when the "real" images appeared on all of our screens; instead of fans saying "That's awesome!," they were saying "They look pretty much like I expected." While it may have been cooler to see that for the first time on a big screen, he's the central antagonist of the film and it's frankly unlikely that was ever going to happen--so instead it's probably safe to say the studio should have gotten out in front of that one and been the ones to break it. At least then the first impression would have been one of dread, menace, threat--as opposed to the Pez dispenser where he appears to be smiling. At the same time, the harder you try to keep something hidden, the more rabid fans get about the truth. There has been more written about the "real" identities of Miranda Tate and John Blake than almost anything else about The Dark Knight Rises, safe for Bane's voice. Fans who think they know the Truth are almost worse than those who know outright, although at least Warner Brothers can't say that nobody's talking about the film. Maybe the best way to hide something in the modern cinema is to hide it in plain sight. After all, for more than thirty years fans have known with total conviction that Han Solo shot first in the original cut of Star Wars, only to have George Lucas tell them this week that they didn't know what they were seeing. That's virtuoso filmmaking right there--putting something right on the screen in order to keep it hidden! ...Yeah, we're not buying that, either.