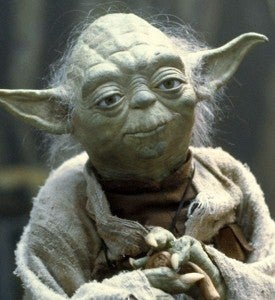 With George Lucas selling Lucasfilm to Disney, most figured it wouldn't be long before there was a Star Wars Park. Now, comes word that George Lucas is planning a park that will feature statues of characters from Star Wars and Indiana Jones. Of course, it isn't the Disneyworld-size theme park that many have been anticipating, but it's just George Lucas being a nice guy for his community.  According to the Marin Independent Journal, George Lucas filed a permit this week to tear down a building in downtown San Anselmo in order to build a small new park on the location. The new park will feature two bronze statues, one of Indiana Jones and the other of Yoda. Lucas is paying the cost of tearing down the building, donating the land to the San Anselmo Chamber of Commerce, and paying for the two statues. The San Anselmo Chamber of Commerce also plans to raise $150,000 to $200,000 to create the park. The Yoda statue will include a fountain and will serve as the centerpiece of the new park. It will be similar to the Yoda fountain that can be found at the entrance to the Letterman Digital Arts Center in San Francisco.