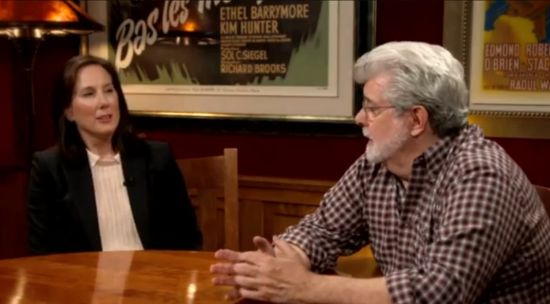 In the third of a five part video series, George Lucas once again talks Star Wars with Lucasfilm President Kathleen Kennedy. If you're expecting him to accidentally drop a director's name or reveal the central plot for Star Wars Episode VII, you will be in for a disappointment. No, what George Lucas instead discusses is how he went about hiring Kathleen Kennedy to run his company. Apparently, Lucas hired her the same way that a lot of people get hired. Lucas took her to lunch and asked her if she would be interested in the job. Lucas said, "It's just such a perfect fit, because she actually has all the qualities that are necessary to run a company like this." The fourth part of the George Lucas and Kathleen Kennedy video series will be released on November 26, 2012.