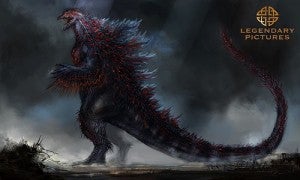 has uncovered a post at Lowyat Forum that appears to reveal a look at Legendary Pictures' upcoming Godzilla remake, expected in 2014 from director Gareth Edwards. UPDATE: Facebook reader Christopher Moriarty points out that these images are not Legendary Pictures images, but can be found on a DeviantArt page where they have been available since at least 2011. A look at the larger images seen on that page would have cast doubt on the veracity of the images much sooner, as the "winged" look of Godzilla's arms in the image at right is more obvious in the full-sized image and doesn't track with what's been seen of the film. 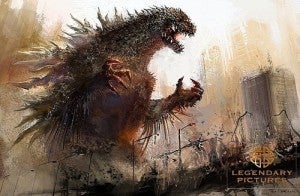 The reporter from Bleeding Cool characterized the posters as "pretty accurate" based on his imperfect recollection of the trailer shown at the Warner/Legendary panel at San Diego Comic-Con International earlier this month, and that's where we sit on the matter, too. They may still turn out to be fakes, but more likely they're official or semi-official materials that will simply never be claimed by Legendary now that they're out there. The film, which remakes the 1956 original, will be the first American attempt at a Godzilla film since the disastrous 1998 version with Matthew Broderick. That film has a dismal 26% rating at Rotten Tomatoes, making it the second-lowest of all of the many Godzilla films.