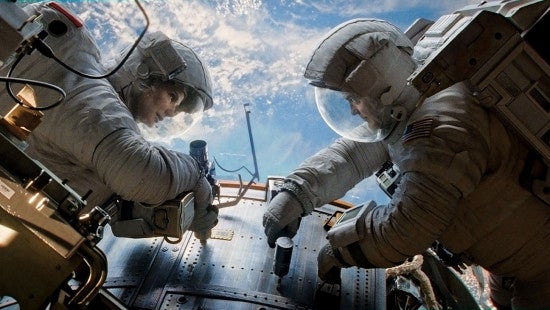 Following the announcement that Gravity will be re-released in movie theaters this weekend, IMAX and Warner Bros. announced today that Gravity will be returning to domestic IMAX theatres starting January 31, 2014. Gravity was directed by Alfonso Cuarón's and stars Sandra Bullock and George Clooney. The film  has grossed nearly $700 million at the global box office, while receiving 10 Academy Award® nominations including Best Picture. Demand for the film has been particularly high in IMAX 3D. Opening October 4, Gravity was the highest-grossing IMAX release of 2013, both domestically and globally. It's also the 3rd most popular IMAX DMR® film of all time worldwide. "Congratulations to Alfonso, David Heyman and Warner Bros. on today's Academy Award nominations. We're delighted with the overwhelming success of Gravity and the continued demand we're seeing from moviegoers, both domestically and around the world, to bring it back in IMAX," said Greg Foster, CEO of IMAX Entertainment and Senior Executive Vice President, IMAX Corp. "Word of mouth has been tremendous, with fans and critics demanding that Gravity must be experienced in the most immersive way possible. The film's ample awards consideration has further cemented its place in cinema history, and we're thrilled to be able to offer it again."

Gravity To Be Re-Released In IMAX On January 31