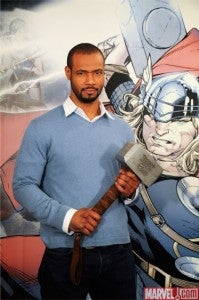 It's been a busy week for Guardians of the Galaxy casting news, which of course makes fans all that much more eager to see some forward motion; this morning there have been a couple of additional rumors added to the mill, in addition to our earlier report that a second major media outlet has backed the Joseph Gordon-Levitt-as-Star-Lord story. Earlier this morning, Comic Book Movie reported that Isaiah Mustafa, Brian Patrick Wade and the WWE's Dave Bautista are up for the role of Drax the Destroyer in Guardians of the Galaxy. One of a few heavy hitters on the team, a combination of this shortlist and Hollywood convention tells us that he'll probably be the team's muscle in the film adaptation. Mustafa will likely be a fan favorite for the role; his public persona is approachable, and he's one of those names that gets thrown around a lot in "fan-casting" circles. He's also repeatedly expressed interest in playing Marvel's Luke Cage. How much interest, you ask? Check out this awesome "pitch trailer" that's been floating around the Web for a couple of years, featuring Mustafa playing the character.

Drax may be a "second lead" behind Peter Quill, since his character has a strong connection to Thanos, who has been confirmed as a villain in the film as well as in Avengers 2. The CBM story says as much, suggesting that the film will revolve around Quill, Drax and Gamora. They also suggest that, in addition to the lengthy list of actors already in contention for the role of Peter Quill/Star-Lord (including Zachary Levi, Joseph Gordon-Levitt, Jim Sturgess and more), John Krasinski of The Office is being "looked at," although even CBM seem skeptical that he'll ultimately end up under the helmet. Moviehole, this morning, gave us another clue: following recent reports that Michael Rosenbaum had read for the part of Peter Quill, it looks like there might have been a bit of a Lex Luthor-versus-Superman thing going on. The site tweeted, "Hearing - from someone that recently worked with him - a former Superman may have tested for "Guardians of the Galaxy", too. Huge shortlist!" The obvious choice there is probably Brandon Routh, who seems pretty comfortable with genre fare. Besides appearing as Superman in 2005's disappointing Superman Returns, the actor also played a villain in Scott Pilgrim vs. the World, the title character in Dylan Dog: Dead of Night and appeared in the geek-favorite TV series Chuck (as did Mustafa). There's an outside chance they could be talking about Tom Welling, who reportedly was up for Dr. Strange at one point, but the Smallville finale gave fans every indication that Welling wasn't particularly interested in playing a straight superhero.

Guardians of the Galaxy Casting Rumors: Superman, Drax the Destroyer and More