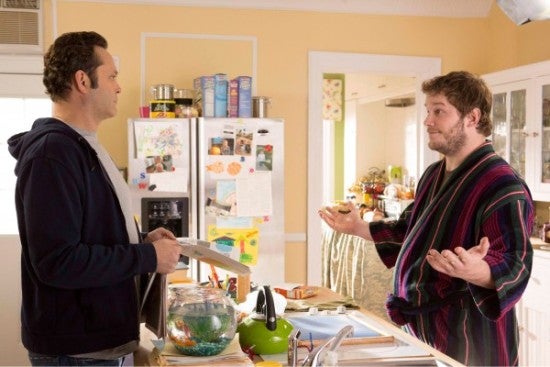 DreamWorks Pictures announced last night that Guardians of the Galaxy star Chris Pratt will join his Delivery Man co-star Vince Vaughn and Chris Pratt in a personal introduction to their film via satellite at 100 movie theaters across the country on November 6 at 7:00 p.m. (local time). Following that, fans around the world can participate in a live Twitter chat with Vaughn and Pratt  using the movie's official Twitter account and the hashtag #DeliveryMan for a chance to receive personal answers from the stars and an opportunity to win a free Delivery Man gift box from TaskRabbit. Fans who would like to attend a screening on "Delivery Night" can sign up starting on November 1 at the movie's Facebook page. In addition, as part of the "Delivery Man" campaign, DreamWorks Pictures has partnered with TaskRabbit to provide free deliveries in Chicago, Los Angeles, New York, Boston and San Francisco, each day from November 1 through November 6 between the hours of 10:00 a.m. and 7:00 p.m. (EST). Fans who sign up for delivery tasks on TaskRabbit during that time may earn the chance to have their delivery sponsored by the film, receive a movie pass and a $25 Lyft credit they can use to deliver them to the screening on November 6.