Chris Pratt will be playing Star-Lord in the upcoming Guardians of the Galaxy film, where he will come into possession of a unique orb that is the object of a galaxy wide manhunt. With the first trailer for Guardians of the Galaxy being released, we've compiled some background information on the character from the comic books. Guardians of the Galaxy hits theaters August 1, 2014. In the comic books, Peter Quill is Star-Lord, leader of the Guardians of the Galaxy. The character was created by Steve Englehart and Steve Gan and first appeared in Marvel Preview #4, 1976. Star-Lord's creators never fully realized their plans for him, and the character instead made infrequent appearances in Marvel's comic book magazines of the era. He was most often written by Chris Claremont, and the first collaboration between Claremont and John Byrne (the team that would later reinvent the X-Men) was on a Star-Lord story in Marvel Preview #11. The character was largely forgotten until Dan Abnett and Andy Lanning revitalized him for use in their modern Guardians of the Galaxy series. In the Marvel Universe, Peter Quill is the son of Meredith Quill, a human woman, and Prince Jason of the Spartoi Empire. Jason crash-landed on Earth during his trip home to fight in a war and fell in love with Meredith. After a year of work, Jason's ship was finally repaired to the point where he could continue his voyage home. Jason's alien tech alerted him to the fact the Meredith was pregnant, so, not wanting to put her or the child in danger, Jason left earth without telling Meredith. Within the month, Meredith married her high school sweetheart, Jake Quill. When Peter Jason Quill was born, he resembled neither Jake nor Meredith, leading Jake to believe that Peter was not his own son. He carried the child outside to kill him, but suffered a heart attack. Peter was left outside, staring at the starlit sky, for an hour before Meredith was able to crawl to him. The experience weakened Meredith physically and emotionally, and she devoted her whole life to raising Peter. Peter grew to have a fascination with all things space. When the war was nearing its conclusion, Jason asked his uncle, Gareth, to bring his family to him from Earth. Gareth had his own ambitions, and so hired a crime lord to kill the Quills. The crime lord subcontracted to a hired gun who went to Earth. At age 11, Peter saw the ship land and saw the aliens who got off of it murder his mother. The aliens left, believing their job complete, but Peter survived and swore vengeance. Gareth told Jason that his family was dead. Peter became a loner, but managed to get into NASA and, after overcoming many social obstacles, was stationed on Eve, NASA's first permanently manned space station. While Peter loved the stars, he was beginning to fear he'd never find the vengeance he sought. Then, some sort of celestial being appeared to the crew of Eve, calling itself Star-Lord and promising that one human could become like it. Peter volunteered for the role, but was denied and discharged. Unwilling to give up what might be his only chance to find his mother's killers, he stole a space shuttle, returned to Eve, and rocketed to the rendezvous point where he was to meet the celestial being. There, he met a being called the Master of the Sun, was turned into Star-Lord, and was shown a vision of his mother's killers ship being destroyed. Star-Lord would eventually find that the image he saw was untrue. He would meet his mother's killer and slay him personally, as well as Gareth. He would then meet his father, now emperor of the Spartoi Empire. Jason would try, persistently, to convince Peter to become his heir to the throne, but Peter consistently would refuse. If Star-Lord were a Dungeon & Dragons character, he would epitomize chaotic good. He is a brilliant tactician and master combatant, favoring Kree sub-machine guns for weapons. He continues his adventures through space, helping others as he goes, and does it all with no reverence for figures of authority. He has helped battle Thanos, Ultron, and the Annihilation Wave, and he's even had a turn as a member of the Shi'ar Imperial Guard. Currently, he leads the Guardians of the Galaxy, protecting Earth from the machinations of the many empires and overlords who would seek to control it. 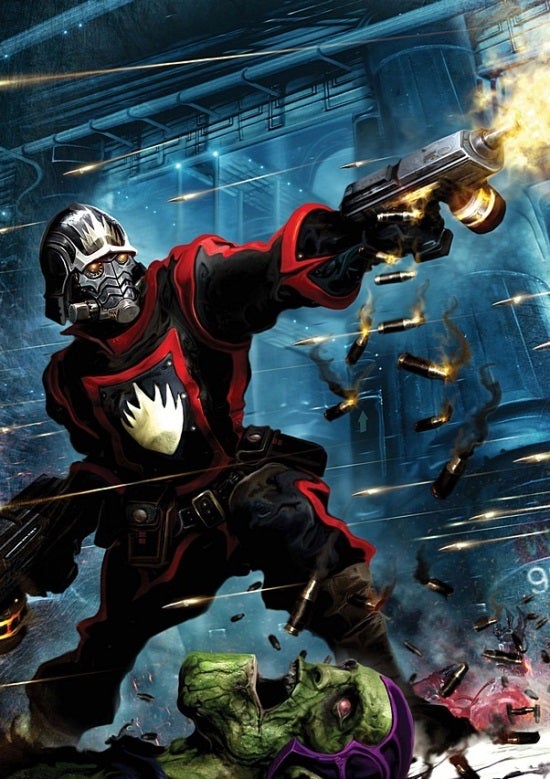 Guardians of the Galaxy: Who Is Star-Lord?

Watch Nathan Fillion Dance On The Set Of The Suicide Squad