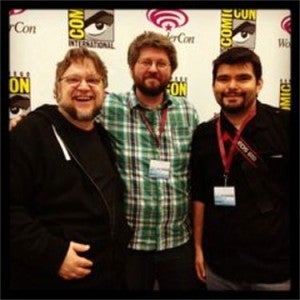 Ever wondered how you could get into one of those big Hollywood movie premieres, which are usually reserved for studio executives, celebrities, and preferred members of the press? Well, some innovative You Tube video makers seem to have found the answer. Back in March, a couple of guys named Bryan Harley and Brodie Mash released a sweded version of the first Pacific Rim trailer on their Dumb Drum You Tube channel. During WonderCon, Pacific Rim director Guillermo Del Toro actually called out the sweded version of the first trailer as being inspiration for the new WonderCon trailer he cut. It turns out that Bryan and Brodie were at WonderCon, and they met Guillermo Del Toro at a signing. When Guillermo Del Toro realized they were the guys who did the sweded trailer, he gave them a big bear hug and said, "I loved it! My daughters loved it, we watched it a bunch of times!" Guillermo Del Toro also invited Bryan and Brodie to come to the Pacific Rim world premiere in Hollywood. And sure enough, good to his word, Del Toro had Warner Bros. send the guys an invite to the Hollywood premiere, which is taking place on Tuesday, July 9, 2013. For the entire story, check out Brodie's post on Reddit.