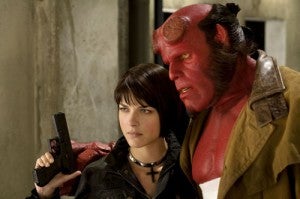 Last weekend at New York Comic Con, both director Guillermo del Toro and Hellboy creator Mike Mignola expressed that the prospects for a third Hellboy movie seemed pretty bleak, with Mignola joking that fans shouldn't hold their breath, since del Toro left it up to the comic artist to generate the film's $150 million budget. Of course, that doesn't change the fact that everyone wants it to happen, from Mignola and del Toro to stars Ron Perlman and, apparently, Selma Blair, too. In an interview with Bloody Disgusting, the erstwhile Liz Sherman said that she still holds out hope for the movie to happen, adding that in a perfect world she'd like it to come along right after she's finished with Anger Management, the Charlie Sheen-headlined sitcom on which she's currently appearing for FX. "It's my dream to work with Guillermo del Toro again. I just want to be near him. I love him. I miss him. It's my dream that one day when I'm done with the TV Show they say, 'ok the movie's actually going to go!' That would be the biggest heaven." She added, "I mean it's all set up. Hellboy 3 is the biggest payoff and the biggest horror. I want to see what these twins are up to, if one's the devil and one's an angel. I want to see what Hellboy and Liz are up to! I know the film is the apocalypse and the apocalypse isn't cheap to shoot so we have to find some funding and get going with it!"