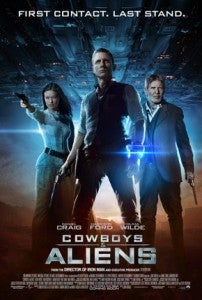 In a pair of unrelated articles out today, both iconic TV producer David E. Kelley and Iron Man director Jon Favreau took some time out to look back at their recent, failed comic book adaptations, namely the aborted Wonder Woman pilot for Kelley and the Cowboys & Aliens feature film for Favreau. Comic Book Movie tracked down a WTF Podcast interview, in which Favreau held court on a number of topic, including his critically-panned adaptation of the Platinum Studios graphic novel. He said:

"Cowboys and Aliens, it didn't bomb but it was definitely a 'pillow party'. You always feel this way about the latest project you've done but I feel like it's the most evolved work I've done. Plus, the experience of working with Spielberg, Ron Howard, Brian Grazer, 'Kurtzman and Orci' and Damon Lindelof and then Harrison Ford and Daniel Craig, it was one of those things where when you achieve a certain amount of success, you're the expert. You're going to decide and give these platitudes of 'if it bends it's funny.'... I learned the lesson that you can make the best Bacon Sundae in the world but if people don't want to eat that flavor of ice cream...and the name was misleading. With so many [actors] associated with it, it was seen as the big dog and we felt we were underdogs with how obscure the material was...The name that was so interesting made everyone think it was going to be a comedy and maybe it would've been better served with a different vision... It's always a trick of 'how can you get the big summer movie, with the big budget, where you can play with all the toys yet do something interesting with it. With Iron Man I had been spoiled because it worked out. [Looking at Iron Man] part of me felt that it was going to bomb and part of me felt like this is going to be the best movie in the world. "The stroke of brilliance with Iron Man was [Robert] Downey. It's not that it was him, it was that it was him at that moment, having paid his dues and having a spiritual redemption...He came out of the other end of the tunnel glowing, there was a radiance to him. I knew that if I could get him then every decision for the movie would be obvious. My biggest contribution was the knife fight to get him [as] the star. Letting someone do it for themselves is the most gratifying feeling of connection." 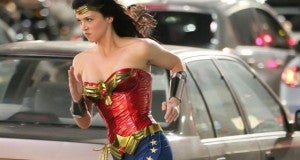 Kelley, meanwhile, held fast to the position that Wonder Woman is still a viable TV property, despite a number of false starts and his own failed pilot. Speaking with The Hollywood Reporter, he said he wished he'd had more of an opportunity to fix the mistakes he made with his Wonder Woman. He also joked that if he were to tackle a superhero project again, he would probably call Joss Whedon and "beg to try and do it with me! He's pretty good at it." From the interview:

"I still believe it's viable for a television series. I think it's ripe to do it. We made mistakes with ours. My only regret is we were never given a chance to correct them. We had a lot that was right about it and a great cast. In time, we could have fixed what we had done wrong, we just didn't get that chance. All my series have been a work in progress to a certain extent where you figure them out by episodes three, four or five. This one actually gelled sooner than any that I have had in the past. We would have gotten there and I wish we were afforded a little more time. I do believe in the potential of the series and I wish them well with it. I think it could be a great success. "We produced it at warp speed and it's a special effects show and it took more time than we were able to give it. We were able to give it more time and extended it had we been picked up. Just learning the storytelling -- the genre was very different for me and I had a lot to learn; my learning curve probably would have gotten better. I'm sad we didn't get to do it but I do believe it can work for the CW. They're smart to try it. "I would. It's different for me, it's a genre that I have a lot to learn about. At this point in your life, everybody should do something that they're scared of; I was a little scared of it, I remain a little scared of it and be happy to wade into the fear again."