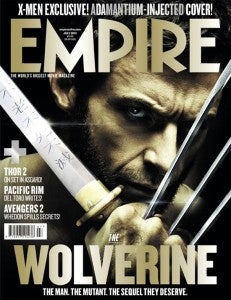 In a newly-released interview in this week's issue of Empire Magazine, The Wolverine star Hugh Jackman admitted to being a little frustrated to get almost no time off in between Wolverine gigs, but that he expects X-Men: Days of Future Past to resonate with audiences and to redefine the franchise in the way last year's Avengers film did for the Marvel Studios movies. After having read the script, Jackman said, "I was like, 'Okay, this is a slam-dunk idea. This, actually, is phenomenal. I think this will be, for X-Men, like The Avengers.'" His reservations were personal, not artistic, admitted the actor, who recently told Entertainment Weekly Radio that the "Wolverine Diet" is a real drain on him. "I was a little frustrated because I was nearing the end of a 12-to-18 month physical odyssey and getting ready to have Christmas off - and lasagnes. And I'm, unfortunately, not as young as I was, so I have to start earlier and go for longer. So I was like, Okay, we gotta keep going.' But I'm really excited about it, and I never thought in a million years I would play one character in seven movies."

Hugh Jackman Compares Days of Future Past to The Avengers

Disney+ With Ads Launching in December