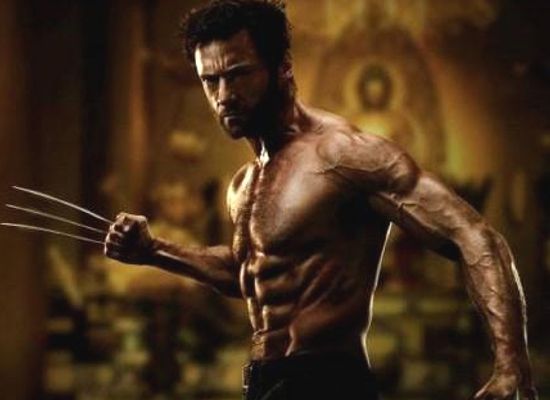 Ever since a shirtless photo of Hugh Jackman in The Wolverine was released, fans have been speculating that the image might have received some touching up. The 44 year old Hugh Jackman appears more ripped than in his previous Wolverine appearances, and his physique seems to defy reality. However, in an appearance on The Jeff Probst show, Hugh Jackman cleared things up. When Jeff Probst asked him how much of the Wolverine photo was really him, Jackman said, "That's all me, man." Jackman went on to add that it annoyed him that people thought the picture was fake. Jackman said, "Because it was brutal getting there. And by the way, I asked the company if they could just..you're spending millions on special effects, just help me out. I want to eat pizza and drink beer. And they said no." In order to get the ripped muscular look for Wolverine, Hugh Jackman had to go through extensive training, which also included a body builder trick of dehydrating to make his veins pop out. Jackman revealed, "For that kind of body, I had to go up in weight, big, lift big and heavy, then strip down." In addition to talking about his training techniques, Jackman also talked about how the success of the first X-Men movie caught people by surprise. Jackman said, "It was a surprise to everyone, not just me. I don't think anybody understood how popular the series was. This was the early days of the Internet. People didn't really understand. Even Comic-Con was kind of a small deal back then, and comic book movies were non-existent, so Bryan Singer the director really kind of re-ignited it, and it was a shock. I could tell it was a shock. I mean literally I had calls from the studio at 7 o'clock in the morning on a Sunday morning, and they were drunk. Still drunk from the night before, I'm kidding, but they were very excited."

Hugh Jackman Says Wolverine Muscles Are All Him