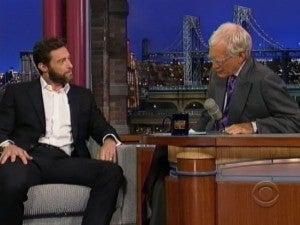 On Tuesday night's Late Show With David Letterman, Hugh Jackman made an appearance to promote The Wolverine. Letterman asked about how Jackman got his physique for The Wolverine, and Jackman joked, "I was pretty much born this way. I just came out this way." Then, Hugh Jackman explained that he actually got his workout program from Dwayne "The Rock" Johnson. Hugh Jackman said, "You work out three hours a day, six thousand calories a day." Jackman explained that this was a lot of calories for the type of food he was eating. Jackman added, "I actually eat for eight hours of the day." Hugh Jackman also told Letterman about making a faux pas in a Japanese spa. He was given a small towel which he doused in cold water and put on his face, but the towel was actually meant to cover his private parts. Hugh Jackman also talked briefly about X-Men Days Of Future Past, saying they had about a month of shooting left in Montreal.