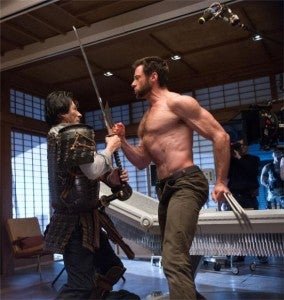 As some the embargoes are lifted from set visits to The Wolverine, a number of mainstream press agencies are starting to roll out more details about the James Mangold-directed X-sequel. A popular question, of course, was whether the X-Men characters might one day share the screen with Marvel's Avengers, who dominated the box office last year--and The Wolverine star Hugh Jackman wants to see it. "One of the great things about this movie is that a lot of people from Marvel are here and it seems a lot more inclusive than it has been in the past," Jackman told Screen Rant. "I don't know what's happening behind the scenes, but I think it's fantastic. I actually just asked the other day, I said, 'I don't know what the legal situation is, but why don't these companies come together? Why isn't it possible?' Because personally, I would love to mix it up with Robert Downey, Jr. and Iron Man and kick his ass. It'd be great. (laughs)" Of course, it's anyone's guess whether that inclusivity is still something that's happening, given the fact that both Marvel and Fox want to use Quicksilver and Scarlet Witch in their next films, and that the rumor has it they're not sharing the toys nicely.