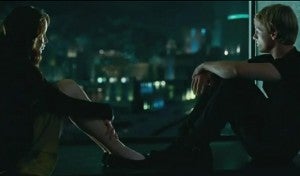 exceeded expectations again, dropping only 43 percent this weekend and taking the box office crown for the third weekend in a row, according to Box Office Mojo. This in spite of a respectable opening for freshman comedy American Reunion and James Cameron's high-profile, 3-D upconvert of Titanic. Studio estimates suggest that the film will not only make $33.5 million this weekend, but in doing so will surpass $300 million total box office gross today. That makes it the sixth-fastest film to that number, and the second-fastest non-sequel behind only Cameron's Avatar, the highest-grossing movie of all time. This means that the film--which has consistenly been compared to Twilight since pre-release, will exceed the total box office gross of any single Twilight film in only its third week of release, as well as six of the eight Harry Potter movies. American Reunion's opening was incredibly soft compared to the other theatrically-released installments of the franchise, but those all opened during the summer, when more high school and college kids are roaming about looking for R-rated movies and comedies; the disappointing open was actually the highest Easter weekend opening for any R-rated movie since 2002's Panic Room, which in spite of lukewarm reviews and a fan reputation as director David Fincher's worst film opened at more than $30 million and went on to make nearly three times what his fan-favorite Fight Club did at the box office. Fincher's last release, The Girl With The Dragon Tattoo, opened in January with less than $12 million in spite of being--like The Hunger Games--the first installment of one of the best-selling series of novels written in the last ten years. That film went on to gross a total of $102 million, barely more than its $90 million production budget, which showcases just how impressive it is that The Hunger Games managed to make its money back on the opening weekend. Next week will see The Hunger Games' box office dominance challenged by two more newcomers--Chris Hemsworth's pre-Avengers flick The Cabin in the Woods and the much-hyped reboot of The Three Stooges starring Mad TV's Will Sasso.