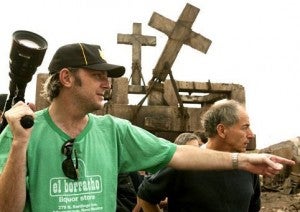 Well, Lionsgate has selected their next tribute. Constantine and Water for Elephants director Francis Lawrence has reportedly been offered the job of directing Catching Fire, the sequel to this spring's massive hit adaptation of Suzanne Collins' The Hunger Games. Cue every entertainment writer in the country groaning, as they now have to specify "Francis Lawrence" or "Jennifer Lawrence" in every other paragraph for the next two years. Originally a music video director who has worked with acts including Green Day and Britney Spears, Lawrence comes into the film after five years of bouncing around between TV and movies, directing I Am Legend and Water for Elephants in between shooting episodes of Kings and the pilots for Touch and the forthcoming ABC series Gotham. After The Hunger Games director Gary Ross left, citing among other things a feeling that the studio wasn't giving him enough time to make the quality of movie he wanted to make, the pressure was on Lionsgate to find a credible director quickly so that they could get the film into development quickly. After considering a field that included Tomas Alfredson, Alejandro Gonzalez Innaritu, Cary Fukunaga and Duncan Jones, the race was narrowed earlier this week to Lawrence and Moneyball director Bennett Miller. According to The Hollywood Reporter, both directors met with the studio today but it was widely believed that Lawrence would get the job due to his schedule being more flexible. In addition to wanting a quick turnaround for the sequel to their studio's biggest success of all time, Lionsgate needed someone with an open schedule to accommodate star Jennifer Lawrence, who must be done shooting by January so that she can fulfill a prior obligation to shoot a sequel to X-Men: First Class for Fox. Catching Fire is expected to make its way to theaters in November 2013.