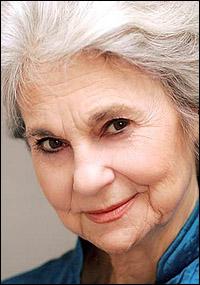 , the forthcoming sequel to this spring's smash cinematic hit The Hunger Games, has cast Munch star Lynn Cohen as Mags, an octogenarian former Hunger Games victor and mentor to Sam Claflin's Finnick Odair. Claflin himself was not previously announced, but according to his IMDb page, it appears that he's in place. Says the press release from Lionsgate:

Known to New York theater audiences for decades of memorable roles, Cohen has also appeared in critically acclaimed films such as Steven Spielberg's Munich and Charlie Kaufman's Synecdoche, NY, as well as commercial fare such as Sex and The City and its sequel. She can next be seen in They Came Together, with Paul Rudd and Amy Poehler. The Hunger Games: Catching Fire begins as Katniss Everdeen has returned home safe after winning the 74th Annual Hunger Games along with fellow tribute Peeta Mellark. Winning means that they must turn around and leave their family and close friends, embarking on a "Victor's Tour" of the districts. Along the way Katniss senses that a rebellion is simmering, but the Capitol is still very much in control as President Snow prepares the 75th Annual Hunger Games (The Quarter Quell) - a competition that could change Panem forever. The Hunger Games: Catching Fire will be directed by Francis Lawrence, and produced by Nina Jacobson's Color Force in tandem with producer Jon Kilik. The novel on which the film is based is the second in a trilogy that has sold more than 50 million books in print and digital in the U.S. alone.