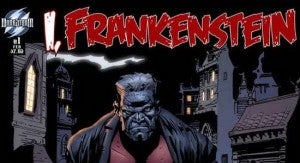 Of the numerous projects based on comics and graphic novels due to hit theaters this year, perhaps none is more shrouded in mystery and less covered than I, Frankenstein. Starring The Dark Knight's Aaron Eckhardt, the film is set to debut its first footage at CinemaCon in Las Vegas next month, and Eckhardt told Collider that he'll be seeing the movie--based on the graphic novel by Kevin Grevioux--along with everybody else. While he's looped dialogue, he says, all the footage from the film that he's seen is pre-FX and so the film will look very different. Also starring Chuck's Yvonne Strahovski,the story follows Frankenstein's monster, named Adam and having taken the surname of his creator, as he becomes involved in a war between two immortal clans in an ancient city. "Oh yeah, you take a modern tale of the monster of Frankenstein, put Kali sticks in his hands, and then you put gargoyles and demons and good and evil in it," Eckhart said. "And we're talking about a kick-ass movie. We worked really hard on it. It's got a lot of action. I did all the fighting myself, 100%, pretty much except for one fall, so I'm really proud of that."

I, Frankenstein Star Aaron Eckhardt Talks About the Film