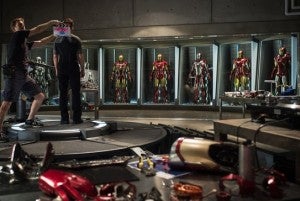 In an online chat about Iron Man 3, someone working near the film's set in North Carolina had quite a lot to say about the movie. While the poster was anonymous, most of what they've said matches up to some things we've already known, or assumed, about the production, and much of the rest of it sounds pretty sensible. Among other things, he claims to have bumped into one of Robert Downey, Jr.'s stunt doubles during one of his coffee breaks at SAS and says that the building will, indeed, be used a as a Stark Industries campus. The poster's comments were:

"The filming in Cary is continuing today/tonight on the SAS campus. There was supposed to be a car/race scene filmed along the Cary Parkway but I heard that It was cancelled/rescheduled because of rain. "I work in the building they are filming at on the SAS campus. Cameras started rolling early this morning in the lobby of the building and as I left work this afternoon they were filming a scene at the entrance of the building. "There were many attempts to get into the campus to get a glimpse of the action but it was a closed set on private corporate property. ONLY employees of that specific building were allowed to enter the building or even get in view of the action. Even a lot of extras were SAS employees. "It didn't seem like there was any action scenes being filmed. Just a lot of people in very nice business suits. "There was a rumor floating around that filming will continue in the Cary/Raleigh area through Friday. "As we all probably know by now, Epic Games will be the 'face' of A.I.M. On the other hand, the SAS campus is portraying Stark Industries. "The cast (mostly extras) were seen sporting 'Stark Industries' name badges on set and between scenes."