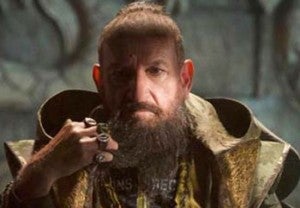 Earlier we brought you news that the Man of Steel's Henry Cavill had been selected as Biggest Male Breakout Movie Star of 2013 by Fandango users. So how did Iron Man 3 fare in the poll? Well in the same Fandango poll in a category which seems custom made for comic book movies, Ben Kingsley was selected as the Most Anticipated Villain of 2013 for his role as The Mandarin in Iron Man 3. Following Ben Kingsley in the poll were several villains from other science fiction and comic book movies. Benedict Cumberbatch was voted second most anticipated villain for his role in Star Trek Into Darkness, followed by Michael Shannon in Man of Steel, Will Yun Lee in The Wolverine, and Christopher Eccleston in Thor: the Dark World. In addition to topping the Most Anticipated Villain category, Iron Man 3 also finished as the third overall Most Anticipated Blockbuster of 2013 (trailing The Hunger Games: Catching Fire and The Hobbit: The Desolation of Smaug). Robert Downey Jr. also finished in fifth place in the Sexiest Man In The Movies For 2013 category for his role as Tony Stark in Iron Man 3. Fellow comic book star Hugh Jackman finished in second place in the same category for his role in The Wolverine.