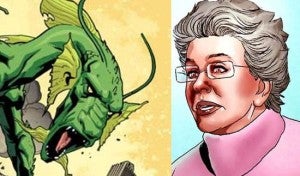 With Iron Man 3 having opened in theaters around the world, some fans have been taking in multiple viewings looking for Easter Eggs. Surprisingly, there appear to be rather few Easter Eggs in Iron Man 3. In fact, some may argue there are no Easter Eggs in Iron Man 3, because the few Easter Eggs uncovered refer to already introduced characters or rather obscure characters.  We've compiled some potential Easter Eggs below, but please add your own Easter Eggs in the comments if you've uncovered any that we have missed. Captain America – In the Iron Man 3 trailer, a Captain America tattoo is shown on the back of The Mandarin's neck. In an Empire Online podcast interview, director Shane Black explained, "It was actually a part of the design of The Mandarin, part of his cobbling together. It's the Captain America shield with an anarchy symbol in the middle of it. It's a corruption of America thing." Thor – Guy Pearce's character Aldrich Killian makes a Thor reference by saying something along the lines of ever since that guy with the hammer fell out of the sky. Bambi – Happy Hogan calls out to an off-camera secretary named Bambi. In the comic books, Bambi Arbogast is Tony Stark's long-time executive assistant. Fin Fang Foom  – Guy Pearce's character Aldrich Killian has a tattoo of a dragon on his chest. The dragon tattoo is likely a reference to Iron Man villain Fin Fang Foom. Hulk - In the after the credits scene, Mark Ruffalo appears as Dr. Bruce Banner. It's the only point in the movie where another Avenger actually appears. Ellen Brandt – Including Ellen Brandt in the movie opens up the door to both Man-Thing and Doctor Strange. Brandt was married to Ted Sallis, who became Man-Thing. Doctor Strange also recruited Brandt to help the Man-Thing restore the Nexus of Reality. Even though neither Man-Thing or Doctor Strange are referenced in Iron Man 3, the introduction of Brandt could be laying the groundwork for the Doctor Strange movie. Warren Ellis - William Sadler plays President  Ellis in Iron Man 3. The last name "Ellis" is actually a call out to Warren Ellis, who wrote the "Extremis" comic book storyline upon which the movie is loosely based. Iron Man 3 writer Drew Pearce confirmed this homage, tweeting, "Fact: our President Ellis is named after the brilliant and hairy @warrenellis, an unsung architect of the MCU Iron Man."

Glass Onion: A Knives Out Mystery Gets World Premiere Date