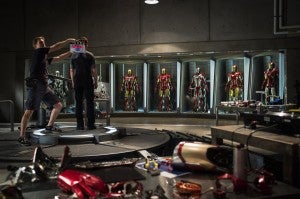 We've been trying to keep you up to date on the production of Iron Man 3, starring Robert Downey, Jr. and Ben Kingsley, ever since they started shooting in May. Well, now Marvel Studios has made it a little easier, releasing their first official publicity still for the film, featuring Robert Downey, Jr. standing in a workshop full of different Iron Man armors. Could this be why the Iron Monger armor is out there? Maybe Stark's own arsenal gets turned against him. Either way, the film will be in theaters on May 3, 2013. Check out Marvel's press release below: