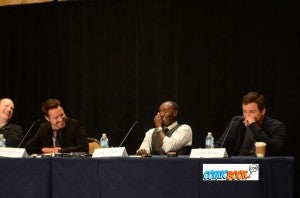 Of the dozens of panels presented by the major publishers and film studios at San Diego Comic-Con International this past weekend, none was more eagerly-anticipated than Marvel Studios' presentation of Iron Man 3. They showed clips from the in-production film, as well as making a handful of announcements about their next slate of pictures, including both sequels and new properties being developed for the first time. ComicBook.com was in the film's pre-panel press onference, and while we presented the first bit of the panel already, we wanted to share the rest with our readers—along with a slideshow of our many photos from the room. Present at the panel were Marvel Studios President Kevin Feige, who described Iron Man 3 as "a very Tony Stark-centric film" and "as self-contained a story as we've done since Iron Man," as well as Robert Downey, Jr., who plays Stark; Don Cheadle, who plays Tony's best friend Jim "Rhodey" Rhodes; and director Shane Black, who takes the reins of the franchise from original director Jon Favreau with this installment. Feige described the first two Iron Man films as part of a "grand master plan" that built over time to The Avengers, and told reporters that the new film would kick off Marvel's next wave of films—which we now know includes Guardians of the Galaxy, Ant Man, Captain America 2: The Winter Soldier and Thor 2: The Dark World. With no subtitle for Iron Man 3, it seems as though the massively-successful franchise is still being treated a little differently by the studio than are the rest of the Marvel cinematic universe. Discussing concerns that a glut of superhero movies might lead to fan apathy as the sequels move forward, Feige said, "I've been at Marvel for twelve years and we've had that concern going back to when X-Men came out, then Spider-Man came out….The trick, if there is one, is to just try and make a great movie. Try to make them all great, all different, all fresh." He said as long as all of the films felt fresh and didn't fall into the same formula, the films should continue to have broad appeal. Asked what made Black the right choice to take the baton from Favreau, Feige said matter-of-factly that "He's a great storyteller, he has a great relationship with Robert," and that Kiss Kiss Bang Bang was a touchstone for Marvel when deciding that Downey was right for the role. He said that people questioning the decision need look no further than Joss Whedon, who had never directed anything on the scale of The Avengers before he got that job, either. "Iron Man 3 is, by design, is a very serious character study," said Feige. "I mean, it's not a serious movie, but we seriously dug into exploring Tony." He said that it was important for the character that the next film following The Avengers would be a movie where he stood on his own without alling S.H.I.E.L.D. or The Avengers in when things got hairy. "We've made enough mistakes together that I think we're all kind of seasoned at this point," said Downey of his relationship with the cast and crew. He said that it was wasty to reteam with Black, who previously directed the actor in Kiss Kiss Bang Bang. "The main thing is Shane's storytelling," Downey explained. "That kind of emotional depth that happens without taking itself too seriously is kind of what Jon [Favreau] set up." To that end, Feige said that there was a real desire to touch on some of the darker themes familiar to viewers of Black's previous films in the next installment, "although Tony won't fall back off the wagon." "You haven't seen my rewrites," joked Downey. "Rhodey picks him up at Betty Ford—scene two!" You heard it here first, folks.