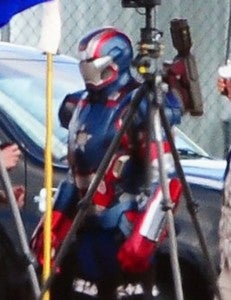 While an anonymous tipster was spilling his guts about the Iron Man 3 location shoot in Cary, NC, co-star Gwyneth Paltrow (the film's Pepper Potts, of course) was spending her first night in Cary taking local media's recommendations for a dining choice. In their report on the subject, NBC 17 reports more details about what actors are on-hand, and more about the much-discussed Iron Patriot armor that was spotted last week. "Among the stars spotted [in the area] were Don Cheadle on set at Epic Games and Guy Pearce at the Umstead Hotel & Spa," reported the station. "Eagle-eyed fans have also reported seeing Robert Downey Jr. dribbling a basketball outside Epic Games and James Badge Dale dressed in a red, white and blue Iron Man-type costume inside the Epic building." The Epic building which, according to a number of online rumors and that anonymous North Carolinian source, will serve as "the face of A.I.M.," suggesting at a minimum that there's a connection between Coldblood-7 (played by James Badge Dale, the man inside the Iron Patriot armor) and A.I.M. Iron Man 3 will be in theaters on May 3.