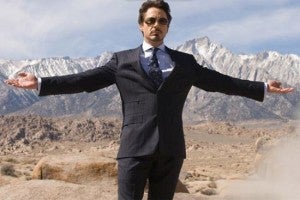 Earlier this week, Iron Man 3 passed The Dark Knight Rises on the Worldwide box office charts to become the highest grossing solo superhero movie of all time. This weekend, Iron Man 3 has also toppled James Bond, Tolkien, and giant robots. With this weekend's box office Iron Man 3 has grossed $1.128 billion at the Worldwide box office, moving into the #5 spot on the all time charts. Iron Man 3 passed by Skyfall, The Lord Of The Rings: The Return Of The King, and Transformers: Dark Of The Moon on its way to #5. Iron Man 3 accumulated $19.4 million at the U.S. box office and $17.4 million at the international box office over the weekend, so the film still has money left in the tank. However, next on the list above Iron Man 3 is Harry Potter And The Deathly Hallows Part 2, which sits quite a bit higher with $1.341 billion.