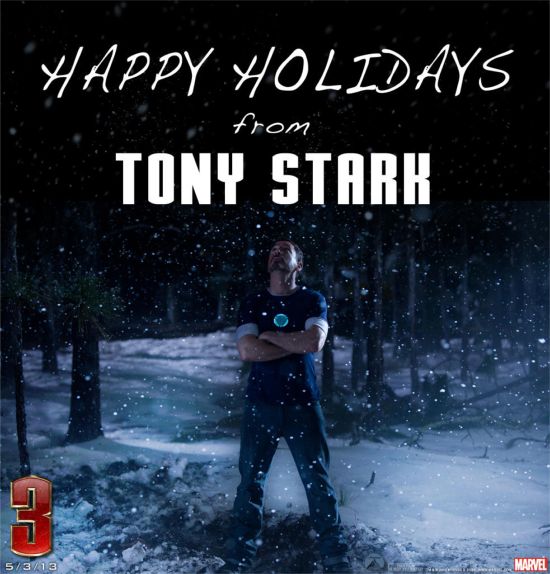 As snowstorms across the United States make holiday travel hectic today, Tony Stark seems to be rather enjoying himself in the snow. As part of a holiday greeting, Marvel has released a brand new photo of Robert Downey Jr. as Tony Stark in Iron Man 3. In this new photo, Tony Star is standing in the middle of a snowstorm and staring up at the sky. The snow on the ground around him is all torn up, so we're assuming this scene must take place after we see a battered and bruised Iron Man laying flat on his back in the snow in the recently released trailer. Tony Stark also appears to be wearing the same rolled up sleeves and jeans that he's seen wearing in the trailer as he drags his iron man armor through the snow. This new photo must occur between the Iron Man flat on his back and the armor dragging scene, as Tony Stark pauses to either enjoy the winter wonderland or to look for whatever it was that sent him hurtling to the ground. Iron Man 3 is set to be released in theaters on May 3, 2013.