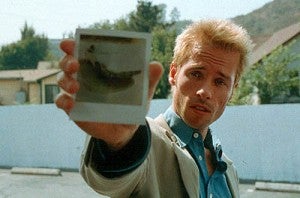 According to comments made while promoting this weekend's release, Lawless, Memento and L.A. Confidential star Guy Pearce compares his experience on Iron Man 3 to that of the just-released Prometheus, calling his roles in both films cameos. "Prometheus and Iron Man are really kind of cameo stuff," Pearce is quoted as saying by Vulture. "So the experience of shooting them--I mean, on some level, it's tricky because you feel like a bit of an outsider. You don't really live the experience that you do when you're there all day every day with everybody. But at the same time, it can be more fun sometimes because you're just working in concentrated spurts." He danced around exactly what he does in the film, comparing the experience to Daredevil, the critically-lambasted Ben Affleck vehicle, which Pearce was apparently offered and turned down. "The thing about Daredevil was that it was the role of Daredevil [that I didn't want to do]. Certainly in those days...it was ten years ago. I've probably loosened up, and I feel a little more experimental in what I'll take on these days, but I still don't know that I would want to play the superhero myself, since I'm playing a different kind of character in this film." That's perhaps interesting, given that Pearce's most iconic film role to date was in Memento (pictured above), in which he was directed by Christopher Nolan of The Dark Knight fame. Pearce elaborated only somewhat on that final point, saying that the character moments and the sense of fun and humor Marvel brings to its films attracted him to the franchise. "I think that, based on the first two movies, there's a great chemistry between Robert [Downey Jr.] and Gwyneth [Paltrow], and I just think the films have a fun, joyful sort of quality about them," said Pearce. "I've just enjoyed them. So I just felt like I wanted to be a part of this."