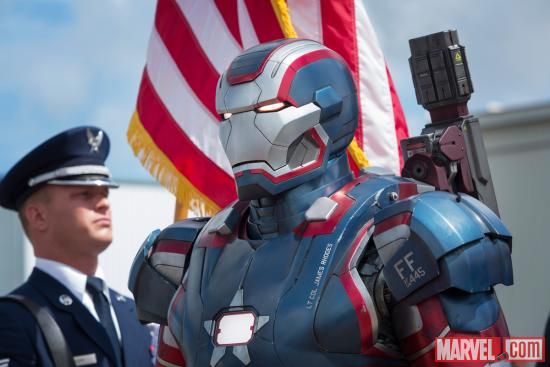 While Marvel Studios President of Production Kevin Feige has gone on recording stating that no other Avengers will be appearing in Iron Man 3, he didn't necessarily preclude the possibility that their presence might be felt in spirit. During the first Iron Man 3 trailer, many fans were shocked to see what looked to be Captain America's shield tattooed on the back of The Mandarin's neck. Upon closer inspection of the tattoo, the star in the center of Captain America's shield also appeared to have been replaced with an "A" for anarchy. Now, DailySuperhero.com is reporting about another possible Captain Americaconnection in Iron Man 3. According to their source, James Rhodes actually adopts the new color scheme of his Iron Patriot armor, because he's a big Captain America fan. While this is the first we've heard of this rumor, it does make a lot of sense. Since Iron Man and Captain America butted heads a couple time in The Avengers, it could be an interesting jab at Tony Stark for James Rhodes to utilize the armor as a tribute to Captain America. Iron Man 3 is scheduled to arrive in theaters on May 3, 2013.