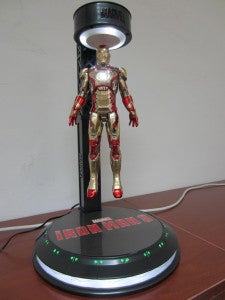 A while back, Junk Food got in touch with ComicBook.com to tell us (shortly after we'd covered their big Batman 1966 event in Los Angeles) that they had a full line of Iron Man merchandise they were promoting in conjunction with Marvel's Iron Man 3, out in theaters on Friday. Shortly thereafter, Disney did the same, although their version expanded beyond just the normal clothes and included things like iPod docks, 3-D glasses and a huge array of toys. Since then, we've seen even more--including toys of characters like Ultron who (unless there's a post-credits scene that hasn't leaked yet) plays no role in the movie but will still get a toy branded "Iron Man 3." Why? Because why not? If there's even a chance this is to be Robert Downey, Jr.'s last outing as Ol' Shellhead, nobody wants to miss out on that gravy train. Among the highlights, which we've included in the gallery below, are a remote-controlled, flying Iron Man, a bicycle, fruit snacks and (at left) the coolest toy-for-grown-ups we've seen out of this movie yet, a ceiling-projection lamp that has a magnetically-hovering Iron Man dangling in the middle. Check out the gallery below and the links above for more! Or, for one-stop shopping, don't forget our friends at Superhero Stuff, where you can get most of it without shopping around. [gallery ids="48387,48388,48389,48395,48394,48393,48392,48391,48390"]

Iron Man 3: The Merchandising Opportunity of a Lifetime