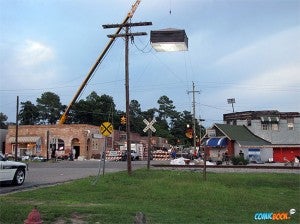 Awhile back Comicbook.com brought you some exclusive photos from the set of Iron Man 3 in Rose Hill, North Carolina. Now, we've got some additional Iron Man 3 set photos courtesy of Mike Clendenen. The great thing about these photos is Mike was actually able to snap both then and now photos of the town of Rose Hill. Amazingly, Marvel Studios returned every thing to pretty much the way it was before in Rose Hill, leaving little of the Iron Man 3 set behind. Mike tells us that most of the actual filming occurred at night. Due to North Carolina experiencing quite a bit of rainy weather this summer, a number of the night time shoots experienced problems with getting rained out. Here's a list of some of the major sets in Rose Hill: an alleyway with a memorial and burned out building, an auto supply store, China Garden restaurant, Church Street market, Trading Company building, The Rocky Top Diner, Dillin's Christmas tree lot, and Walker's Bar. Mike tells us that The Rocky Top Diner was a location for a major scene. The diner was actually labeled as a hot set and rigged to explode. The Christmas tree lot had real trees, a potbelly stove, and a little trailer for an office. As we captured in our earlier photos, there was a hole in the asphalt in one alley, which looked like something had landed there. While early reports from the set indicated that the town's water tower was going to be toppled, Mike told us that instead it was made to just "leak". In addition to the then and now photos, Mike also captured some photos of the actual filming, which show the town all lit up with Christmas lights. There was also fake snow on the ground, and word was that even more snow was going to be added digitally in post production. Thanks to Mike for letting us share these great photos with our readers that really show how the town of Rose Hill was transformed for Iron Man 3 filming. 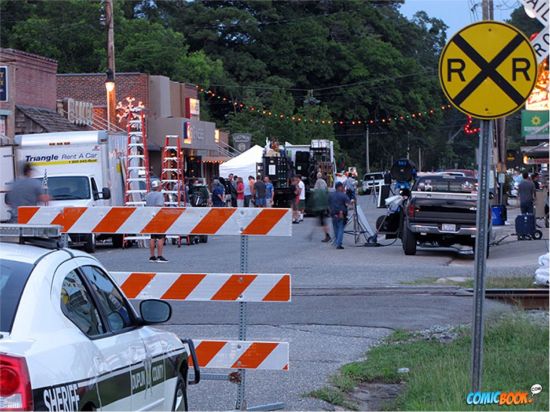 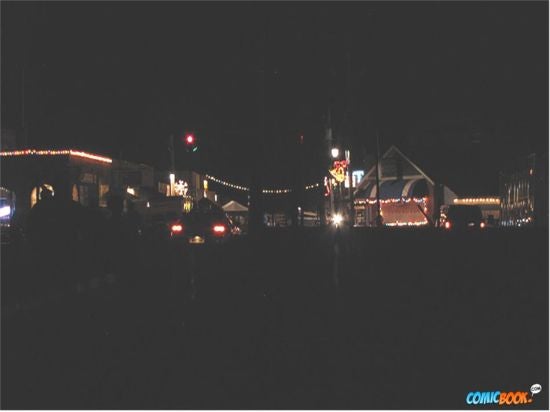 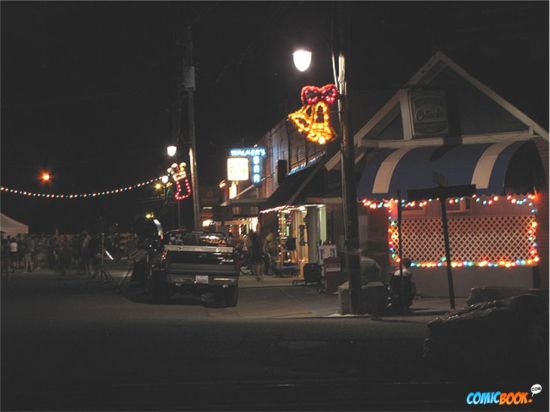