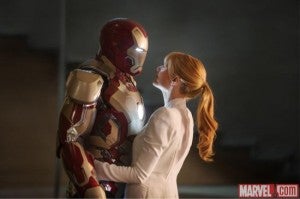 Not only will Iron Man 3 receive a Super Bowl commercial (as was widely expected) but in fact there will be two of them--a one-minute spot and a shorter, thirty-second spot, which will air during or after the big game on Sunday. That's the news from Screen Crush, who have nothing in the way of details. Here's what they had to say in total:

"One of the biggest films of 2013 will get not one, but two Super Bowl commercials. Marvel will premiere a new :60 trailer plus a shorter :30 TV spot that may air during the pre- or post-game show."

is due in theaters on May 3 and will be the first major blockbuster of the summer movie season; Marvel and parent company Walt Disney Studios are hoping to capitalize on the slow late spring/early summer tentpole season by releasing a broadly appealing movie that can sustain several weeks at the top of the box office charts, as they did with Marvel's The Avengers last year. Super Bowl XLVII airs on Sunday, February 3, 2013 starting at 6:30 PM ET on CBS.