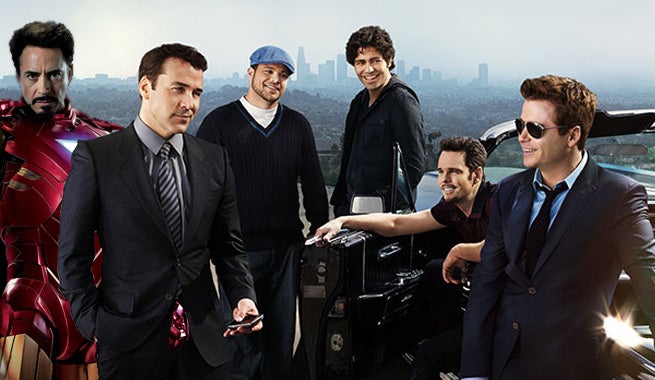 Entourage rolls into theaters this week loaded with celebrity cameos. While Iron Man himself, Robert Downey Jr. can be see for a quick instance walking the red carpet at the Academy Awards, the references to the Marvel Cinematic Universe are certainly greater throughout Entourage.

Be warned, mild spoilers for funny moments in Entourage follow.

The first reference to a Marvel movie came with one of Entourage's many celebrity cameos. The screening party for Vince's "Hyde" movie was loaded with A-listers and professional athletes. Among those famous guests was Iron Man and Iron Man 2 director Jon Favreau who doubles as a star in those films, playing Tony Stark's assistant, Happy.

The fictional Johnny Drama starts a conversation with Favreau and like always, he's looking for work. Drama asks Favreau for a spot in Iron Man 3 but Favreau tells Drama they already did Iron Man 3. "What about Iron Man 4?" Drama begs before criticizing Downey Jr and remarking he is too old for the role.

The next reference came from a new character to the Entourage franchise: Travis McCredle played by Haley Joel Osment. The money bag behind Vince's movie tells Vince he loved him in "Aquaman 2." Fans of the HBO Entourage series know that Vince only did the first "Aquaman" movie, so when corrected, Travis recovered by saying all super hero movies look the same to him - except The Avengers. "All five of them sharing the screen," really got his attention. Travis was no smart guy and we super hero fans get the emphasis here too, seeing as there was six heroes in The Avengers.