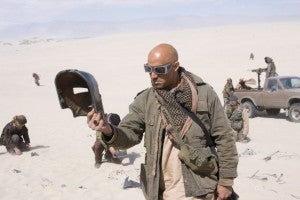 During a new interview with The Express Tribune (via CBM), Iron Man actor Faran Tahir, who played the villainous Raza, said that the original script for Iron Man called for Mandarin's Ten Rings terrorist organization to be an explicitly Muslim group. Worried about the way the faith was being portrayed and seeing no particular storytelling reason why they had to be Muslims, Tahir reportedly took his thoughts to Marvel executives, who agreed with him and changed the film. "After seeing the script, I spoke to [director Jon Favreau and producer Kevin Feige] and explained that it was a superhero movie, in which the bad guys can be mercenaries. To my delight, they saw the point." He added, "[Hollywood writers] don't know what we are like in real life and it is not their responsibility to clear misconceptions about us." Lest you perceive this admission to mean that Tahir is difficult to work with, consider that in the years since Iron Man was released, he's appeared on Chuck, Lost, Burn Notice, Dallas and in J.J. Abrams's Star Trek. He's also rumored to play Cobra Commander in the upcoming G.I. Joe: Retaliation. It's unclear, but probably unlikely, if Raza will make an appearance in Iron Man 3. In previous interviews, Tahir has kept the possibility open, saying that his character's story was intentionally left open-ended in case they needed to pick up with him again when The Mandarin finally appeared. Iron Man 3, though, appears to be packed to the gills already and likely isn't looking to pile on additional plot or characters. Iron Man 3 will be in theaters on May 3.

DC's Creature Commandos Story So Big It Had to Be Animation